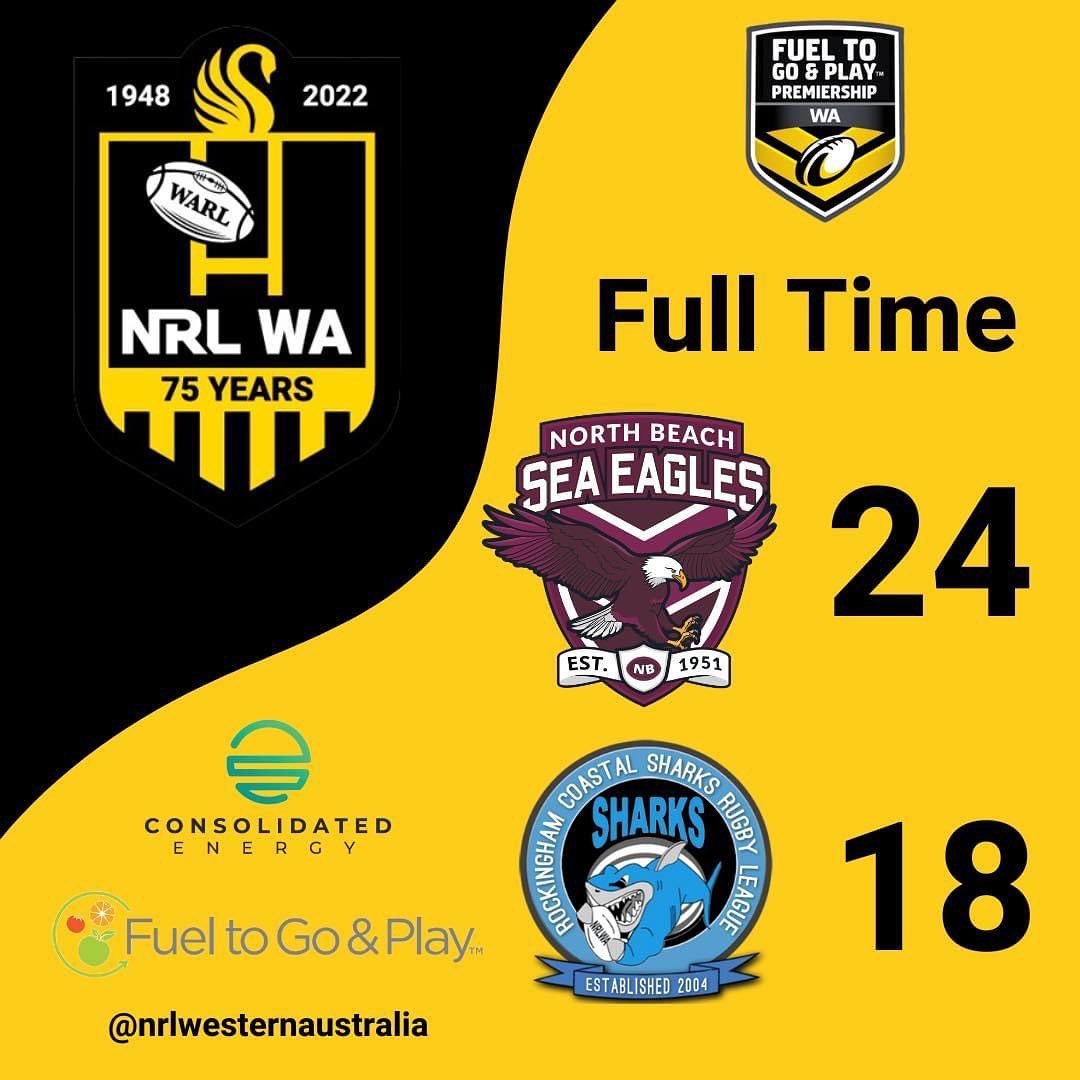 A Ryan Woolley try 22 seconds from the siren sealed a memorable 24-18 win for the North Beach Sea Eagles over NRL WA Fuel to Go and Play Premiership pacesetters Rockingham Sharks on Saturday.

With the scores locked up at 18-all after 79 minutes of a tremendous arm wrestle, Woolley took advantage of a Sharks defensive slip up to go over and earn the home side outright third place on the ladder with just one round to go.

Woolley was one of the stars of the show, scoring the opening try after just three minutes as Phil Douche’s side took to the air with a series of high kicks to test the Rockingham defence.

“We’d been practising all week and it worked,” a delighted Douche said.

The Sharks, missing three key players (Tom Murphy, Damien Worth and Andrew Jeffery) fought back in a second half duel and with minutes left Keelyn Tuuta-Edwards’ conversion from a Sean Scott try levelled the scores.

“We had confidence in our systems and we have improved a lot in recent weeks,” Douche added.

Sharks coach Darren Shaw said the first half aerial attack hurt his side. “Five tries from kicks was a major difference,” he said.

“We improved in the second half but we have still to find the consistency we need.”

Quintin Fui had levelled after Woolley’s opener only for the Sea Eagles to score again, and again before the halftime break.

Kabati Matanaklagi capitalised on a North Beach mistake to close the scores early in the second half as the match swung back in favour of the Sharks, but the home side then took advantage of a Sharks error to score again.

When Sean Scott drove over in the corner with minutes remaining, hope was restored and Tuuta-Edwards’ kick from the sideline levelled it up - with all tp play for.

The Sharks had their chances as time ebbed away before Woolley saw a gap in the line to find the whitewash.

Shaw was disappointed, but not downhearted.

“We have come along way from March when we wondered if we would enough players. We go again next week - another big day at the club.”

At Admiral Park Joondalup Giants emerged triumphant in another clash that went down the the final seconds, defeating the South Perth Giants 22-18.

After leaping to an 18-0 lead the Giants let the Lions back in late in the game and with 15 seconds on the clock thought they had levelled the game in the left corner, but referee Scott Spittles ruled a forward pass.

“We hd no bench for the final 15 minutes,” Giants player-coach Taurean Sheehan said.

“It was an amazing effort.

“I kept sending out a countdown message that there was only so many minutes to hang on.”

“We were terrible in the first half, too many defensive errors.” he said.

“But we put it behind us and move on to next week.”

The result leaves both South Perth and Joondalup needing a win and hoping the other loses next week to grab the final playoff spot.

Fremantle were awarded a win after Ellenbrook forfeited.